Could Marijuana help your dog or Cat?

Disclaimer: It is illegal in the UK to sell CBD products directed at Pets.

NB. Pets also; generally don’t use the internet nor purchase items,
so we specifically do not advertise directly at animals.

Alison Ettel, MBA, has never got high for fun, but she’d like to feed your dog cannabis.

Why? Alison is the CEO of TreatWell Health, a Californian firm making medical marijuana products for people – and their canines.

Her rivals include Treatibles, which sells a hemp oil “for animals of all kinds”, and Pet Releaf, whose hemp dog treats look like fancy vegan snack-food.

It may sound mad, but as more US states legalise recreational cannabis use, pot for pets is booming.

Veterinary groups are cautious at best, but a mounting number of dog owners say the drug is easing their animals’ anxiety and chronic pain.

Firstly, the obvious question: No, they’re not smoking it. Or eating it whole.

Cannabis at human strengths can be toxic for dogs, so firms are making dog chews, oils and topical creams using cannabis extract. 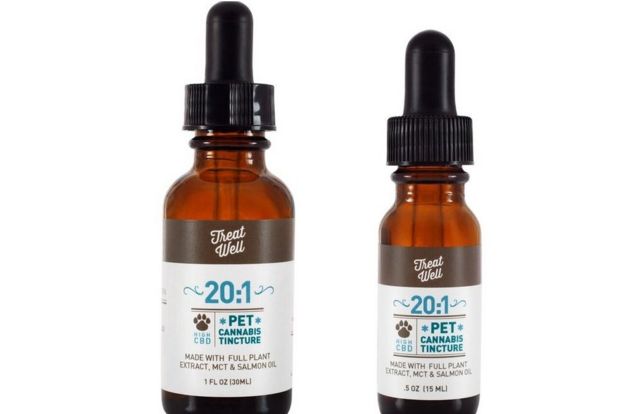 Some use marijuana, but more often it’s hemp, which belongs to the same plant species. Both contain the compound Cannabidiol (CBD), which studies suggest can reduce inflammation, and combat seizures and anxiety.

“She is in great health for a dog her age,” she says, “and I attribute that to good genes, good food and the cannabis.”

The only side-effects she’s heard of are sleepiness and increased thirst – “so you do have to make sure they have access to do their business regularly”.

She’s far from the only convert.

Her owner Joyce Lattimer claims that after one dose, “she hopped right down from her chair when I called her to go outside – usually I have to call several times and start pushing her off”.

The next day, she says, “she came over just to say hi and lick me on the leg. I almost cried; it’s been so long since she’s done that”.

Pet parents with elderly dogs may relate to the pain of watching them deteriorate while the vets’ bills stack up.

Still, you might think, why give your pup weed when you could get an FDA-approved medicine?

The manufacturers admit that for a lot of owners, it’s a last resort. Their dog may be terminally ill, or suffering terribly with bad joints.

“We treat a lot of anxiety, a tonne of arthritis… but probably the number one thing we treat is cancer,” says Ms Ettel.

She’s keen to point out that there are no stoned Shih Tzus staggering around as a result.

Hemp won’t get your dog high because it has much lower levels of THC, the psychoactive compound found in cannabis. Ms Ettel says her marijuana potions won’t either, because the dose is small and carefully controlled.

“There’s a couple of people that are in the dude category, all, “I’m gonna get my cat high!” tuts Dr Sarah Brandon, a veterinarian who makes hemp products under the Canna Companion brand.

“We highly encourage people not to do that. Don’t give your cat or your dog weed. They don’t like to get high, they don’t understand what’s going on – it’s very scary for them.”

That seems clear. So, is canine cannabis actually legal?

In short, that depends on where you are and what you want.

America’s cannabis law is messy, because while 29 states and the District of Columbia have legalised marijuana for medical use – and nine recreationally – it’s still illegal at federal level. That means it’s illegal for US veterinarians to prescribe cannabis products for dogs.

Ms Ettel can only sell in California, her base. Owners there need a medical marijuana card even to buy her pet products.

And hemp? It’s a grey area. The manufacturers all insist it’s legal thanks to provisions in the 2014 Farm Bill.

But Project CBD, a non-profit group in favour of medical marijuana, says hemp-based CBD oil is technically illegal at federal level, even though the US authorities broadly tolerate its sale across state lines.

Asked for its views on canine cannabis, the American Veterinary Medical Association said it “would not advise pet owners that it is safe for dogs at this time”.

The American Society for the Prevention of Cruelty to Animals agreed.

“At this point, this area contains more questions than it does answers,” said Dr Tina Wismer, medical director of its Animal Poison Control Center.

The US animal supplements market is worth in excess of half a billion dollars, and is expected to grow considerably in the next five years.

And whether you see it as progressive or just hippy nonsense – there’s every chance canine cannabis is already in a shop near you.

“We’ve got hundreds of thousands of animals using our products across the country,” said Julianna Carella, whose company Treatibles sells “wellness chews”, hemp oil and capsules.

“We’re in over a thousand pet stores; we’ve got some chain stores using the product… The growth of the cannabis industry in general has really moved the needle on this.”

Like all the manufacturers the BBC spoke to, Ms Carella yearns for some scientific research to back the results her customers are citing. Will it happen? Perhaps in time.

At Colorado State University, the College of Veterinary Medicine and Biomedical Sciences is conducting two clinical trials with CBD – one involving treatment of arthritis, and the other epilepsy in dogs.

For now, CBD converts are spreading the word at ground level.

“People see with their own two eyes what’s happening with their animals when [they] are given the product,” says Ms Carella. “And if all we’ve got to go on right now is anecdotal evidence, I think that’s a great start.”

We use cookies to ensure that we give you the best experience on our website. If you continue to use this site we will assume that you are happy with it.Ok