Charlotte Caldwell and 12-year-old son Billy, who suffers from epilepsy, land in
~Heathrow after having cannabis oil confiscated by  UK immigration.

The mother of a boy suffering from severe epilepsy has had cannabis oil confiscated at Heathrow Airport today after she brought the product from Canada to treat him.

Charlotte Caldwell flew into the UK with a consignment of the banned oil which she insists helps her 12-year-old son Billy cope with his condition.

British customs officers seized the oil this afternoon, prompting Ms Caldwell to vow to return to Toronto and keep trying to bring the oil to the UK.

The mother, from Northern Ireland, said: ‘It’s a very sad day in 2018 that us parents who have children with this absolutely brutal condition, epilepsy, that we have to flee our own country to get cannabis oil for our children.’

Asked what she would do next, she replied: ‘I’ll just go back to Canada and I’ll get more because my son has a right to have this product in this country.’

She described the customs officers who seized the oil as ‘absolute gentlemen’, adding: ‘They were very conflicted about removing it, one of them had tears in his eyes.’

She was not cautioned by border officials, Sky News reported. 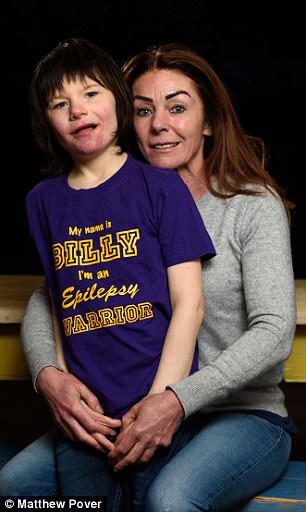 The families of eight other children with epilepsy who are supporting her campaign met her at the airport to show their support.

Ms Caldwell insisted they would continue campaigning to have the oil made available in Britain.

‘I’m horrified that they have removed it.’

Billy became the first patient in Britain to be prescribed cannabis-based medication on the NHS after enduring up to 100 seizures a day and routinely ending up in hospital.

He was originally given the treatment by a doctor in the US, where it is legal in the majority of states. Ms Caldwell said it rapidly stopped Billy’s seizures and drastically improved his quality of life.

But the single mother from Castlederg, County Tyrone, was left distraught last month when the Home Office told her family doctor to stop doling out the drug or face suspension or withdrawal of their licence to practice.

We use cookies to ensure that we give you the best experience on our website. If you continue to use this site we will assume that you are happy with it.Ok